In April 1956, just a few months after the publication of the first articles about "the cure with billions" appeared in the Dépêche du Midi, written by Albert Salamon under the auspices of Noel Corbu, a group of researchers from Carcassonne conducted various surveys in the church, the rectory and the cemetery with the mayor of the time Mr. Etienne Delmas.

The fruit of these investigations was due to the intervention of Antoine Fages, who was a contemporary of Sauniere and led investigators to the steps of the choir of the Church, across the hall, where a skeleton buried in lime was found with the skull showing a split in the parietal bone by a blunt object.

This skull was missing for decades, and in 1970 Mr.& Germain Blanc-Delmas warned in the press about the fact that the 1956 researchers had stolen a skull found in the church of Rennes-le-Château.

The investigator who took the skull was Dr.André Malacan, who kept it secret until the day of his death in 1997. The skull was taken to Paris and it was not until 2002 that the grandson of Dr. Malacan, Julien Saddier met the adopted son of the mayor, Mr. Germain Blanc-Delmas. From this date they worked intensely with the authorities of RLC for the return and the Carbon14 dating of the lost skull ... In 2013, authorities warned the owner of the skull he should return it - after some time this was presented to a Quillan priest on May 22, 2014 who delivered it to the authorities of RLC.

After a few months the C14 test was performed:

The skeleton is "a man in his fifties, sturdily built and who died between 1281 and 1396. His teeth were in good condition. As visible in the parietal vault wound, the Dr. Zammit (Anthropologist) considers that it is not a trepanation, but could have been hit with a long gun, halberd type ...It seems that he would be an important person, given where he was buried, in the central hall, next to the stairs of the choir".

After all these years, from August 7, 2016, the skull is now in the Museum at Rennes where now everyone can see it ... 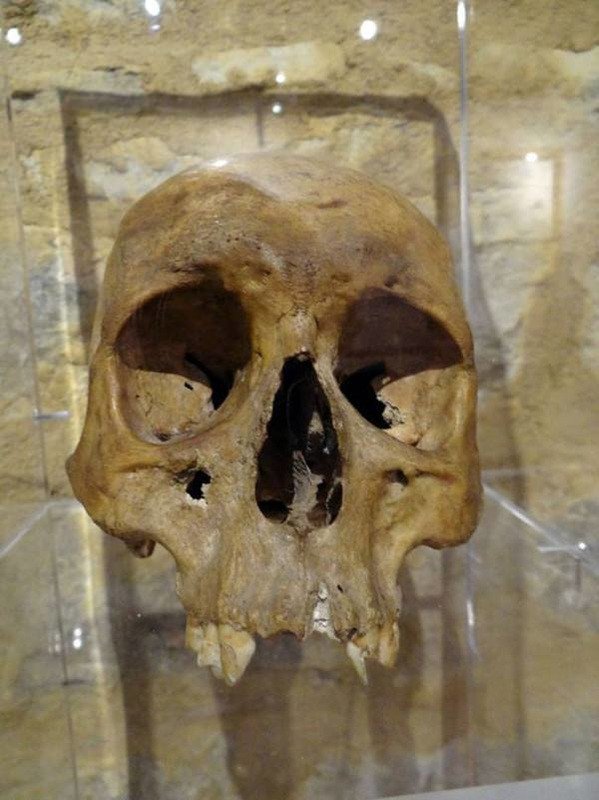