the Count of Saint Germain

At this website there is a reference to the Count of Saint Germain. It says "He had first appeared in London in 1745 and  ..... St. Germain had close ties with the then owners of the Shugborough estate, the Anson family.  The first time St. Germain had contact with the Ansons was the year 1749, and he may have remained in close contact with them until or shortly before 1755 when St. Germain went to India. Still, he returned to England after his trip to India, reportedly bringing back secrets including how to purify diamonds, and remained in England until he went to Paris after 1757. Recall that the possible dates for the construction of the Shugborough monument were the years starting from 1749 until 1756.

Could St. Germain have been the one who instructed the Ansons to build the monument?

Records show that a significant change occurred in the life of Lady Anson starting 1750, that is, shortly after her first contact with St. Germain in 1749. If there is a year in which the conception of the Shugborough Monument seems to belong it is 1750.

This is a year in which Lady Anson seems to have had a particular interest in Poussin and Shepherds, and which seems to provide a mysterious context for the monument, its Poussin relief, and its inscription.

The interest of the Anson family in the works of Nicolas Poussin is further stipulated by the portrait Thomas Hudson made of Lady Elizabeth Yorke Anson in 1751. In this painting she is holding a copy of Poussin’s first version of “The Shepherds of Arcadia”.

St. Germain returned to England in 1760 after his brief stay in Paris. Lady Anson wrote a letter to Thomas Anson dated May 2nd 1760 revealing to him the secret conversation she had with the Count:

"I am whispered, as a secret, that he tells some odd things, & says more: He talks of his own general Benevolence, meaning no harm to any country; wishing well to France; would have assisted the French King if he would have followed his advice & relieved his subjects from the weight of Taxes; says he has it in his power to give the King of France more than his Majesty can give him; with other such hints that seem to mean the Great Secret…..”

The Count is claiming to be richer than the King of France? And what was this Great Secret that he was hinting to Lady Anson?" 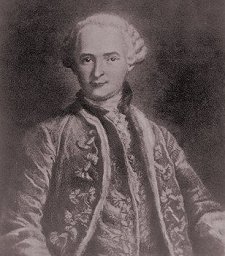