Re-posted from this BLOG SITE.

Later gospel writers and church fathers seemed annoyed that there were so many women named “Mary” in the New Testament. Lists were often made trying to nail them all down…a hopeless task. The usual method of listing them was to combine a few as Marina Warner did in her book Alone of All Her Sex. She devoted an appendix to the thankless task she called, A Muddle of Marys, and ends with these words:

The only text to deal satisfactorily with the problemis the Twentieth Discourse, a spurious Coptic work attributed to Cyril of Jerusalem in which the Virgin introduces herself as all possible Marys: “I am Mary Magdalene, because the name of the village…was Magdalia. My name is Mary of Cleopa. I am Mary of James the son of Joseph the carpenter.”

You don’t often see Mary and Mary Magdalene combined. Traditionally they are the yin and yang of women…the good and the bad. But there is yet another slander of Mary/Mariamne saved from the last post but coming from Jewish sources that is crucial to look at now:

A hairdresser was a lowly position akin to being a prostitute. In The Illegitimacy of Jesus, Jane Schaberg says that the Hebrew word for hairdresser is Megaddela. The derisive comment is about Mary the mother of Jesus but the rabbi’s love of puns is directly aimed at “Magdalene.” The first passage to mention this Mary is from Luke making Mary Magdalene the most well-known sinner of all the sinning women in the gospels.

And certain women, which had been healed of evil spirits and infirmities, Mary called Magdalene, out of whom went seven devils, And Joanna the wife of Chuza Herod’s steward, and many others, which ministered unto him of their substance. Luke 8:1-3

Usually, readers dwell on the “evil spirits and devils” part of this statement spinning off thousands of books and movies showing Mary Magdalene as not only a prostitute (most people’s understanding of “seven devils”) but crazy, too. Joanna wife of Chuza, “Herod” Antipas’ steward/chancellor is often glossed over and very little notice is given to the assertion that a follower of Jesus was from the court of “that fox” Herod Antipas, the evil Herodias. Nor is it noted that Mary Magdalene was ranked higher than Joanna by Luke as he named Mary Magdalene first. Then we might note that only Mary Magdalene had “seven” devils—the Hasmonean seven of the Books of Maccabees, Josephus, and the Pleiades’ seven womanly stars. One could also recall that in Mark, it is Jesus who first had the “devils.”

And the multitude cometh together again, so that they could not so much as eat bread. And when his friends heard of it, they went out to lay hold on him; for they said, He is beside himself. And the scribes which came down from Jerusalem said, He hath Beelzebub, and by the prince of the devils casteth he out devils…because they said, He hath an unclean spirit. There came then his brethren and his mother, and, standing without, sent unto him, calling him. And the multitude sat about him, and they said unto him, Behold, thy mother and thy brethren without seek for thee. And he answered them, saying, “Who is my mother, or my brethren?” And he looked round about on them which sat about him, and said, “Behold my mother and my brethren!” Mark 3:20-34

The quote about “Who is my mother” is repeated in Matthew and Luke but not the part about Jesus having the King of Devils…that was edited out and the devils went to “Mary called Magdalene” instead, even though it is their leader’s mother who has just been disowned.

So what about that name “Magdalene” that the rabbis used as a pun against Mary/Mariamne. This Mary is also “veiled;” her father or house is not given. Matthew took “Magdalene” to mean that she came from a place called Magdala.

And he sent away the multitude,&nbsp;and took ship, and came into the coast of Magdala. The Pharisees also with the Sadducees came, and tempting desired him that he would show them a sign from heaven. He answered and said unto them… “A wicked and adulterous generation seeketh after a sign; and there shall no sign be given unto it…Matthew 15:39-16:4

Mary Magdalene might have gotten her reputation, as Harper’s Bible Dictionary suggests, simply because “wicked and adulterous” appears in the next lines after “Magdala.” Or, some have thought, that the town Magdala was given a reputation because of her. But the Magdalene’s “sin” has traditionally been prostitution, though “wicked and adulterous” seems to apply more to the rabbi’s slanders of Mary/Mariamne. As seen earlier, Mark even makes “adultery” the first commandment. (Mark 10:9 Thou knowest the commandments, Do not commit adultery, Do not kill...) But this Mary was “Mary called Magdalene,” she was not called “Mary of/from Magdala.” Looking at a variety of bible dictionaries under “Magdalene,” I came upon the root word of “magdala” and the term “magadan” which mean “tower.” One town that researchers liked as a contender to have been “Magdala” is Migdal-Nunya which means “Fish Tower.” So what if “Magdal-ene” was referring to a tower not a town? Going back to Josephus’ index and looking under “Tower” there was, believe it or not, a description of the world-class palace Herod built himself in Jerusalem with distinctive towers:

Now the towers that were upon it were…for largeness, beauty, and strength, beyond all that were in the habitable earth…and (Herod) dedicated these towers to the memory of those three persons who had been the dearest to him…They were his brother, his friend, and his wife. This wife he had slain, out of his love, as we have already related; the other two he lost in war….The third tower was Mariamne, for that was his queen’s name…its upper buildings were more magnificent, and had greater variety than the other towers had; for the king thought it most proper for him to adorn that which was denominated from his wife, better than those denominated from men, as those were built stronger than this that bore his wife’s name. Wars of the Jews V.IV.3

Once again, without really trying, we have circled back around to Mariamne the Hasmonean Queen. Rev. John Shelby Spong in his book, Born of a Woman says that the Hebrew word “magdal” also means “great,” as in Herod the Great. He can give no reason why a Mary with seven devils should be called “Great,” but look at this:

Mary of the Great Queen’s Tower. Mary called the Magdal/Tower of the Queen, Magdalene. Among the titles given Mary by the church over the centuries beside Queen of Heaven and Mother of God are “Tower of David” and “Ivory Tower”, both genealogical references linking her to King David. Remember the two different genealogies in Luke and Matthew attempting to link Joseph or some think one might be for Mary, to the House of David. But also remember the play on words the rabbis used from “about the same time” that both evangelists were writing their gospels; Mary the “Megaddela” with its pun on Magdal/Magdalene.

Going way out on another limb here, I end up with Mary of the lineage/tower of Mariamne the Great Queen…Mariamne Magdalene the mother of Jesus…the rich “sinner” who traveled with her handmaidens from the palace of her sister Herodias and who “ministered unto him of their substance. 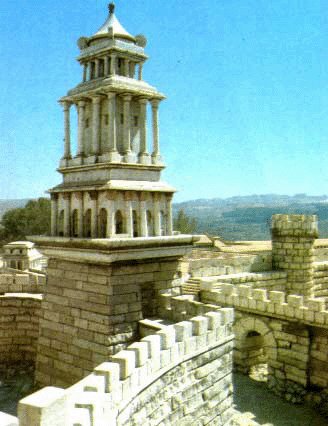 The Tower of Mariamne the Hasmonean Queen built by Herod as part of his palace in Jerusalem…after he had her killed.