I already had hold of one string of his moneybag!' 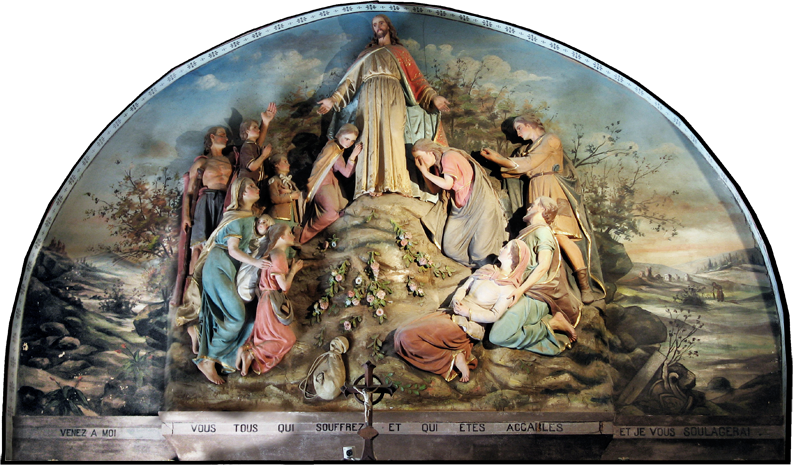 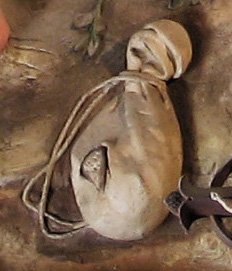 It seems François-Bérenger Saunière did make reference to the legend of a treasure at either Rennes-le-Château or Rennes-les-Bains. Very subtly of course. He did it via his Fleury tableau!

There is a local shepherdess of Rennes-les-Bains associated with a Devil and a treasure. Her name is Catherine Planel and she found a tomb which Labouïsse-Rochefort believed was the source of the Devils treasure legend at Blanchefort. He associated this directly with the Fleury family. Labouïsse-Rochefort wrote;

"Very near to us were the remains of the fortress of Blanchefort, where for a long time the Devil kept guard over an immense treasure. The country people thought that it definitely consisted of 19½ million in gold, without however knowing whether this consisted of gold sheep, gold cows, gold tokens or “Louis d’or” (20 franc piece). Here is how the great affair was discovered. One day, when the Devil had some time to spare (this was before the Revolution) and when it was sunny weather, he began to spread out the 19½ million over the mountain. A young local shepherdess, who had risen that morning, witnessed these huge piles of lovely, very shiny money. She was surprised, moved, troubled, and she ran back and called her mother, father, aunt, uncle… They came running.  But the Devil was swift and it had all disappeared. However, the good news had spread to the village; there was intrigue, excitement, animation...  Several inhabitants agreed on a plan, banded together and made up their minds to go and consult a wizard. The plan was carried out and he was informed of the marvellous discovery. The wizard wasn’t a fool, he specified first that he was to be given half the treasure when it had been attained, and that beforehand he needed four or five hundred francs to prepare for his journey. The money was counted out, they set out, they arrived. The wizard warns them that he is going to fight against the Devil, and that when he calls, somebody must come to his aid to defeat the Devil.  Everybody promises to be brave and go to their places. The wizard makes some passes, invocations, threats; he traces circles and strange figures. Suddenly a great noise is heard… The people become frightened; they flee… As if from a hail of shots or stones!… In vain does the wizard cry for help,

He is left calling, with the outcome of the conflict unknown. He reappeared at last, a long time afterwards, unhappy, panting, covered in dust; he complains that he was abandoned, that he had already overwhelmed the Devil once and that if someone had come running to his call, victory would have been achieved… and the purse gained. He reproached them for their cowardice and left muttering and murmuring for Limoux, after having earned, at little cost, the five hundred francs which had been promised him.

The annoying thing about this affair was that M. de Fleury, then Lord of the villages of Montferrand, Bains, Rennes, as well as the ruins of Blanchefort, wanted to bring an action against them for having attempted to violate his lands… But as the millions were imaginary, his anger abated, and the Devil held on to his treasure, which they had attempted to take from him.

Like  a wretch who is stripped bare,
Wild eyed and haggard-looking,
Forehead bald and misshapen, [or - 'bald of head and double horned]
Bearing as his arms a halberd,
At the foot of this snow-capped mountain, [or - bare hill]
The Angel of the [a] bastard-race,
With his dry and absurd tune, [or - with voice abrasive and absurd]
Keeps constantly under his guard, [or - Keeps constant under watchful guard]
This immense revenue, [or - This treasure so immense in size]
Which I watch from this rock, [or - which, from this rock i gaze upon]
As if I had come, [or - as if i have but hither come]
To mount a careful guard thereon,
And what it holds, that would i steal,
Which to surrender he cannot be far from.[or - Though far he is from loosing hold.]

Gerard de Sede reports this same story with a slight variation in his Accursed Treasure of Rennes-le-Château. In reference to the appropriation of the treasure he says that the breich [Occitan for wizard] 'had hold of one string of his money bag, but you were not there to give me a hand' - referring to the villagers who deserted him in fear when he called for their help. De Sede also reports how the Marquis de Fleury brought an action against the villagers for trespassing on his land. We can therefore provisionally date this to around 1767, when the Fleury family first arrived at Rennes. On this date Marie Anne Gabrielle d'Hautpoul [1739-?] married on 22 September 1767 Paul François Vincent de Fleury, marquis de Fleury [1735-?]. Marie Anne Gabrielle was the daughter of François d'Hautpoul, baron d'Hautpoul [1689-1753] and Marie de Nègre d'Ables, dame de Niort 1714-1781.

The Fleury family are interesting. The Fleury's of Blanchefort originated in Savoy, and  were still in service to the Princes of Savoy until the mid-1600s.

Paul-François-Vincent's grandmother was Marguerite de Rosset. She was the  daughter of Bernardin de Rosset and Marie de Fleury, the sister of the famous Cardinal Fleury.  This means there was a union between the two families by marriage. Paul-François-Vincent was the great-grandnephew of Cardinal Fleury - not via his Grandfather Fleury, but rather through his Grandmother Rosset!

In the book LES DESSOUS D'UNE AMBITION POLITIQUE ( MATHIEU PAOLI), it states on page 37: 'the nobility dictionary indicates that the family of the Fleury is a Languedocian family, with obscure precise origins. In the Spanish archives,  it is mentioned that a Fleury, was a commander of the Order of the Temple at  Carcassonne, at the beginning of the 14th century'.

The other information given was the 'arms' of this family. These were: d'or a trois roses de gueules, posees deux et un. A search on the internet turned up a family with these arms: 'D’azur à trois roses d’or posées'. This is the Fleury family which is listed in the '  L’Armorial de Languedoc'.

The second ‘version’ of the Priory of Sion story reports its founder as Jean-Timoleon Nègri d’Ables with the help of Blaise d’Hautpoul and Abbé André-Hercule de Fleury [who is the brother of Marie de Fleury who married in February 1680 Bernardin de Rosset of Rocozels, lord of Rocozels Bouloc and Ceilhes and whose later descendant was Paul-François-Vincent de Fleury. This 'second' Priory is ‘a more or less direct successor of the Children of St Vincent and (probably) of the Company of the Blessed Sacrament founded in 1629 by Henri de Lévis’. If this is all correct then the Fleury's - well before their appearance at Rennes-les-Bains on the marriage Marie Anne Gabrielle d'Hautpoul with Paul François Vincent de Fleury, marquis de Fleury - may already have had a connection to Rennes.

We have several legends concerning the Hautpoul family, specifically Blaise Hautpoul and Henry Hautpoul, father and son respectively. One revolves around Blanchefort and Rennes-les-Bains and a shepherdess, the other a shepherd and Rennes-le-Chateau. Henry was son of Blaise d'Hautpoul. All lovers of the mystery of Rennes know Blaise at least in name, for his is a very special case. Just after the year 1645, there was supposed to have been a discovery of a fabulous treasure by the shepherd Ignace Paris, in one version, and a shepherdess in a second version, on land owned by Blaise d'Hautpoul﻿. A writer, Labouisse-Rochefort, told in 1832 [publication date, the actual manuscript could have been written as early as 1803] of the legend of the treasure of Blanchefort that was protected by the devil. This legend dated back to the late eighteenth century and takes place in the castle of Blanchefort, located a few miles from Rennes-les-Bains [as seen above].

Cherisey places the legend about the shepherdess at Rennes-les-Bains in a geographical aspect in his alleged manuscript Stone & Paper. For him the legend of the shepherdess describes her seeing the Devil spread the treasure in the sun - 'the entire beautiful hill was lit by it'. This particular 'beautiful hill' is known in the local literature as the 'bonne colline' and refers to Mont Serbairou.

I suggest that the so called Fleury tableau, in Sauniere's church refers to this legend - a beautiful hill, the 'bonne colline', with a money bag shown with strings. So perhaps the Fleury tableau, and the Fleury Mount- is really the local 'bonne colline', the beautiful hill of Mount Serbairou referencing the strings of the treasure bag/purse of the Devil?