The Birth of Septimania - an overview.

With the advent of the principate of Augustus, between 27 and 16BC, the administration of the Roman provinces was reorganized. In 22BC Gallia Narbonensis was entrusted with the direct control of the Senate, thus becoming a "senatorial state". Beziers, a major city, was guarded by the ancient Roman legion called the VIIth and named Colonia Julia Septimanorum Beaterrae; however, the name Septimania itself came much later and indicated the present-day region of Languedoc-Roussillon.

The first ‘historian’ to mention the name was Sidoine St. Apollinaire (430-486) in 471 AD (1). Historians are not agreed whether the name Septimania derives from the old name of Beziers. According to some the name comes from the area's seven major cities (Beziers, Elne, Agde, Narbonne, Lodève, Maguelonne and Nimes).

After several centuries of peace and prosperity under the Roman imperial government, the economic and social crisis of the third century was reflected in Gaul, shaken by sporadic incursions of barbarians, who came down to Spain and northern Italy, especially in 242, 258 and in 276. These barbarians included the Franks and Alamanni. Taking advantage of the weakness of the central authority, the general Postumus in 259 rebelled against the emperor Gallienus (218-268) and proclaimed himself "Emperor of the Gauls." The new and ephemeral empire, with its capital at Augusta Treviorum (modern Trier), maintains independence between 260 and 274 and was then recaptured by the Emperor Aurelian (214-275).

Under Diocletian (243-313) Narbonne (narbonensis) became a province of the diocese of Gaul: thanks to his reforms the fourth century is a period of prosperity and development.

Any study of Septimania then seems to begin with looking at the ancient town of Beziers. Its ancient names are recorded as Besar / Bessar (in the Journey of Avienus;- Les Regions Maritimes), Betarratis (on Volques coins), Baeterrae / Baetirae (at least by 35BC, echoed by Pliny), Beterris at least from the ninth century and then in the fifteenth century Besier and finally Béziers (seventeenth century). The name has changed over the centuries and it is difficult to find the origin of the name. The first assumption can be based on the name "Biterre" - which would have been of Celtic origin (or Celtiberian) and meaning "home or homes of the ford" or perhaps a proto-Basque origin meaning "Village of the road". Indeed, the name "Biterre" appears only after the period of Roman occupation. However an hypothesis regarding the Roman "Baeterrae" suggests a name that originally consisted of two names: Bae + Terrae. Knowing that the meaning of Latin "Terra / Terrae" means "earth / land" and perhaps by isolating languages of Eastern Europe and the West, there can be two definitions: The first - BAE- In Zeneize (the language of the city of Genoa,Italy) ‘bae’ means "lamb". This assumption is plausible because the Ligurians, a people from that region of Italy who colonized this region, had practised sheep farming since prehistoric times. This would give us then as a translation: The land of the lamb. The second - Bae: In Welsh means "Bay". Knowing that the Celtic tribes, and also the Ligurians from Wales and Scotland, have colonized our region, it is also plausible. In addition, we know that the Mediterranean was much closer to Béziers in the past. We would then have a translation: The land of the bay.

Béziers has a very ancient history, as old, probably of any other city in the west coast of the Mediterranean. The hills in the area of Beziers and those on which the city is placed, were formed in the Ice Age. The remains attest to a human presence in the form of flint tools, of the technical Chellean Age, the first stage of the Paleolithic or Stone Age. At that time, glaciers occupied the valleys several times over, filling them, and similarly for the sea engulfing the hills of Béziers and then withdrawing. You can find the remains of shells on the hill of lime kilns, in Fontneuve (under the old cemetery), and many fossils next to Cessenon in the old marble quarry. The climate was either that of the Alaskan tundra, or the hot plains of Africa. Animals living there were the rhino and hippo as well as mammoth and bison, reindeer and sheep.

The oldest human traces are the lanceolate bifaces dating back to the Riss glaciation. In 2002 during the Republic street's roadwork's there were found raw bricks made of clay and an oven dated to 5000 BC. Those discoveries - and many others - have proved the presence of "advanced" sedentary tribes. The other traces consist in hut foundations of the Véraziens' tribes (2500 BC). Structured urbanization (houses&nbsp;along streets) date from the 2nd Iron age - from a people named "Elysices" (certainly Celtiberes).

The Volcaes (a tribe of the Cimbres nation - the same ethnic group as the Gauls) settled down in the middle of 3rd century BC from Toulouse to the Rhone. Then from Toulouse to the Hérault river, there were the tribes of the Tectosages and then the Arecomicis. In Béziers, there were (maybe) the Longostaletes (these people are mentioned on the currencies of this time). The Volcaes were certainly the "customers" of the Arvennes.

In 600BC the oppidum of Ensérune was created. The Chaldean Béross, who lived 350 years BC, tells us that Hercules from Celtic Gaul, had children with Galatea, daughter of a nobleman of the country, and that the son of Hercules built cities to which they gave their names. There was a Ford which existed until the twelfth century within the walls of the city, and it is possible that the original nucleus of Béziers formed on the banks of the Orb, to become later on the nearby hill, where an Oppidum was built and to which the Gauls took refuge in times of war. In the fourth century BC Beziers is one of the main cities of Volques Tectosages and blends with the Celtic Iberians, the Ligurians (from the east of the Rhone), the Phoenicians and Rhodéens who founded trading posts and settlements. They brought to the shores the culture of the vine, olive, and the seeds of civilization. 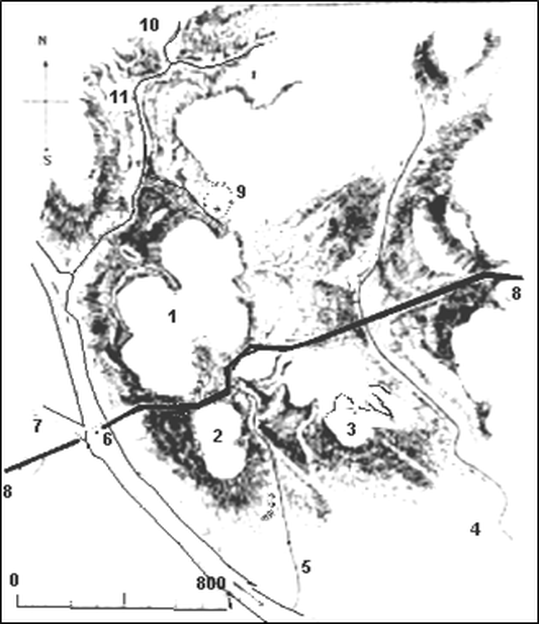 The archaeological excavations in the streets of the Republic and Madeleine show the existence of a Greek city of over 40 hectares with lead pipes, tanks, grain (pithos) and superb villas of over 150 m². In 121 - 118BC the creation of the Via Domitia took place (called Domitian by Aristotle or Via Herculaneum (Herculean Way) before the Romans reused it) and it was built by the father of Nero, Gnaeus Domitius "Ahenobarbus" (meaning "under the nose of brass ") and it became the first Roman road in Gaul.

The Gallic city of the Volcae, Beziers, then called Beter, became the Roman colony of Julia Baetarrae in 36 BC and included the Narbonne province. The forum is likely to have extended over the current City Hall. Because of the Via Domitia the city is an active commercial centre. The wine, first imported from Campania was then exported to Rome in the 1st century AD following the introduction of grape varieties in the plains of Béziers.

But in 77, following a wine crisis a decree (Decree 92) is pronounced to promote uprooting of vines in Gaul. This will be repealed in 280 by Protus that restores freedom of planting. In the third century, the city is surrounded by ramparts.

In 450, Béziers was conquered by the Visigoths, who continued  to rule until 712-724  when the area is then occupied by the  Saracens. These massively destroy all the vineyards. In 736/737  the city is finally back on its feet but also ravaged by the Franks, led by  Charles Martel (bastard son of Pepin of Herstal and Aldaïde and future  grandfather of Charlemagne, whose nickname of Martel was added after  his death to differentiate him from others of his dynasty).