MYTHICAL ORIGINS OF MEROVEE AND THE MEROVINGIANS 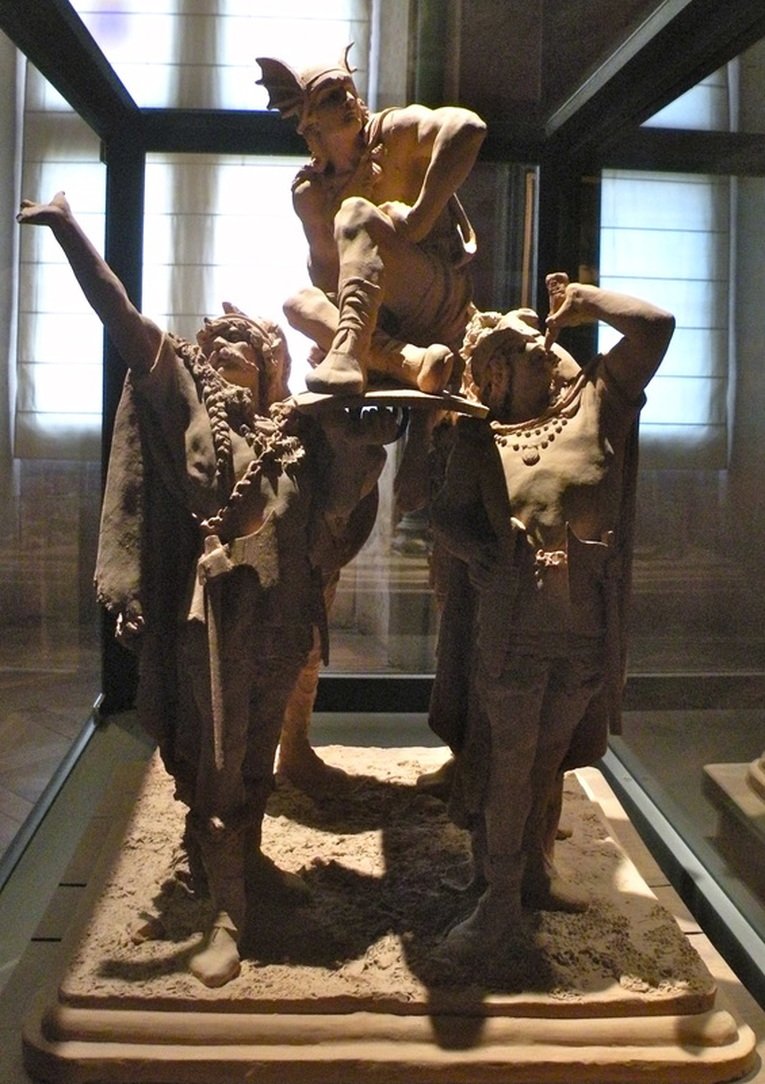 In AD 751, the majordomo of the Frankian kingdom, Pippin, a sort of a grand vizier or a chancellor, dethroned the ruling king, the last Merovingian monarch in France. This ended the dynasty which had raised Klodovig on the French throne in AD 486. The Merovingian line had ruled the Franks even before the conquest of France, starting with the legendary Merovec. [Some dictionaries give the form Merowig, Latinized as Merovaeus, mentioned as grandfather of Clovis I. Any connection with the word claw, derived from Proto-Indo-European *cleu? 1]

Literally translated, "Merovec" means 'sea-born.' His right to the crown and the rulership of the Franks was explained with divine origins. According to a legend, a monster, risen from the sea, had slept with his mother2. In various ages, the forefather of the founders of the present France and the line of rulers that had developed her, the marine monster in question, is represented in several pictures. The little fellow below comes from Olaus Magnus and the year AD 1539, but the same character is also represented in the pommels of Western Finnish luxurious swords from the era called the Merovingian age by researchers. 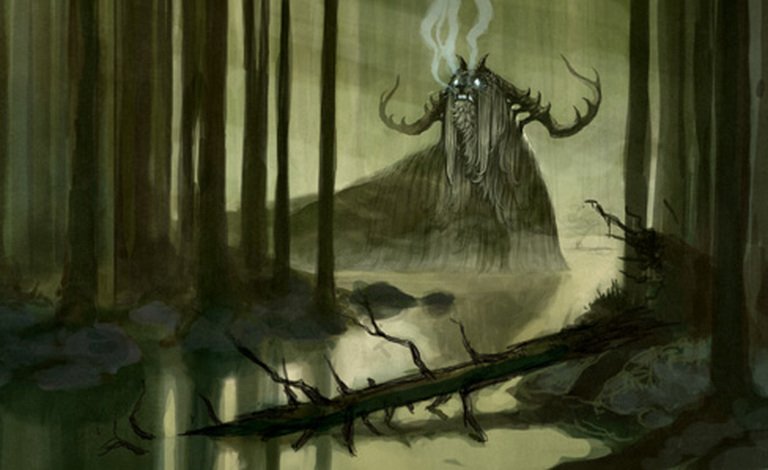 "äinämöinen waited until a week had passed, but the oak did not sprout. Then on a distant shore covered in soft grass and flowers he spied four water maidens, some of them cutting and others raking the grass. Suddenly a mighty sea monster, Iku-Turso rose from the ocean. He pressed all the raked grasses tightly together until they caught fire. The grass burned up like a bonfire until only scattered ashes were left. The giant being placed some tender leaves on the ash, and on top he gently planted an acorn". 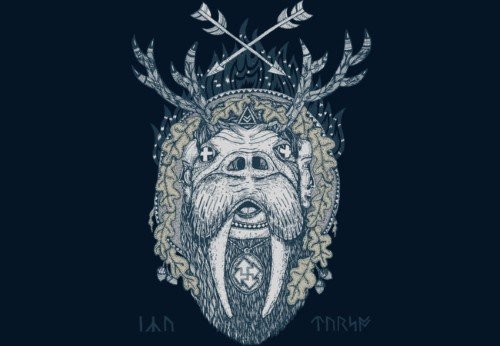 LEFT - The word 'tursas' has also been used for walrus in the past, and some pieces of art show this connection - notice the oak leaves like a wreath: 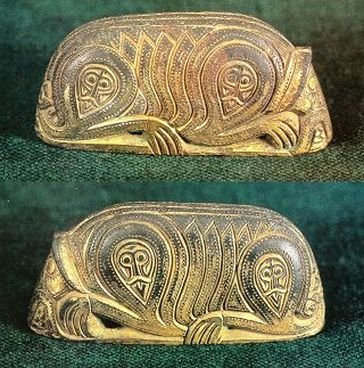 Above - Iku-Turso depicted in the gilded pommel of a sword from the old Kirmukarmu cemetery in Vesilahti, Finland - with faces of some heroes of Kalevala depicted on its sides:

So the Finns have some sort of a relationship with this notable but curious dynasty. What is known about it? Merovec--who had acquired the rulership of the Franks also by exploiting his divine origins--needed only spread out his fingers should anyone doubt his nobility, because as proof of marine birth, his hands had webs in them. At least so the story goes. To understand the problem one has to ask how a story, incomprehensible to the modern man, helped a Frankish crown-seeker to legitimize his position. If his "head of campaign" had told the Frankish folk a previously unknown story, it would have produced very undesirable results. Prince Merovec was deformed, and Franks who were used to frequent wars held physical power in high esteem. A weakness could be turned into an advantage, but only with the aid of an ancient legend which was familiar to everyone.

A marine monster that sleeps with a queen and begets a ruler seems to be a very ancient myth, and it cannot be just another story. A creature that does in the Frankish court what a stable hand or whoever in the later Romanov dynasty did, was obviously to the Franks as central a story for corroborating identity and national feeling as the escape from Egypt was to the Jews. Thus the supporters of Prince Merovec supported their propaganda with a central theme of their national mythology: the story about the founding of the nation?? Olaus Magnus produced his book and map at the beginning of the 16th century, a thousand years after Merovec. The story about the sea-monster still survived but now it lived on separately from the Frankish dynasties.

The creature in "Carta Marina" and the mythical biological (?) father to Merovec are nevertheless one and the same character. This is shown by the "lying figures" seen in the ornaments of the pommels of Merovingian swords discovered in Finland [see illustration above]. These swords belonged to the most prized objects of their time, and not everyone had them. They could be carried only by chieftains or nobility running the errands of the ruler. The ornament under scrutiny shows a four-legged animal as if on all fours. The position is familiar from earlier discoveries from the Finno-Ugrian areas of Russia, where the animal depicted usually was a bear. The pommel ornaments in the swords discovered in Finland are thought to represent the walrus, a marine animal which, to the people of the Iron Age, must have been a true monster, and even lived in the mythical and fear-instilling North--in Norwegian Lapland (Ruija) and the shores of the Kola peninsula. At the time, these regions were strictly under the rule of Kainuu (Kvenland) and Bjarmia.

Thus the "walrus" shown on the pommels is depicted on all fours, with arched back, with its bearded face turned towards the viewer. The creature's hips include an extra face with inlaid granates--semi-precious stones--for eyes, or the entire face was replaced by oval granates. The curious eyes appearing along the body of the marine beast depicted by Olaus Magnus may be regarded as the same feature as the aforementioned face [see above illustrations].

One connection with Finland of Father Merovec can be found through the Finnish pagan war-god, Ikuturso. Ikuturso rose up from the sea to support Finns in war, and he was considered terrible. With us as a war-god, with the Franks, as the begetter of a prince. Meaning the same creature? The added authority brought about by Merovec's webbed hands does not sound as odd as it did before.

Ikuturso can also be found in the Norwegian-Icelandic sagas, the Fundinn Noregr story. According this saga, preserved as recorded by Snorri Sturlusson, the founder of the Norwegian kingdom and her first king Norri was the son of Fornjotr, king of Finland. In literal translation, Fornjotr means 'ancient giant' which refers to the large size of Finns (kvens) and their fame as wizards and giants. The word may be indigenously Norwegian, but it can also be a translation loan, in which case it originates from Finland whence the saga tells us that the conquerors and even founders of Norway came. The Finnish language has an old word 'jatuli' which tradition connects with an ancient people that once lived in Northern Finland. Fornjotr may have been borrowed back into Finnish also in a distorted form; Fornjotr = Horntors (horned sea-creature tursas) = Ikuturso!! This borrowing and modification chain would make Father Merovec, Fornjotr the Giant, and the Finnish war-god Ikuturso the same character, who was known in various shapes and contexts in Norway, Frankia, and Finland. This comparison doesn't still reveal anything about the origin of the character, but these similarities contribute to show a lively cultural exchange between Nordic peoples in ancient times.

Upon linguistic and archaeological grounds it has been deduced that there was a cultural connection, interpreted as migration, from Rhineland in Middle Germany to Western Finland in the 7th century AD. Genetic chartings do not actually show the influx of any large group of people, but e. g. a manner of burial differing from the rest of Finland in the valley of Eurajoki would refer to a different tradition. Possibly around the same time Bothnia received influence not found in e. g. Satakunta and Häme: Western Germanic (Celtic-Germanic?) family names which are still in use in the names of the oldest houses and families of Southern Bothnia, and the linguistic factor x. Could these cultural influxes have imported or "updated" the sea-monster mythology, or has a common mythology facilitated the settling down of the newcomers?

It seems artificial to suppose that the 'meritursas' theme would have been unknown here without West Germanic migration, but the influences explained by this migration may well have brought closer the Finnish and West Germanic (Lower German, Frisian, Dutch) cultures to each other. There are also features which suggest direct connections to Middle Europe such as certain objects etc. which can be found both here and farther West, but not in Sweden. Finnish archaeological material does show connections with the regions around the Danish straits during the Bronze Age, and with the mouth of Weichsel during a much longer period, and certain linguistic influences are notably West Germanic, not Scandinavian.

An interesting Finnish-Rhenish contact can be found in the distribution of the well-known ULFBERTH swords. These quality products of their own time have been found rather widely, but in addition to Rhineland where the blacksmith Ulfberth must have run his factory, there is only one notable discovery concentration: Western Finland. Here these valuable swords have been found even in greater quantities than where they were manufactured, or is this so? Did a merchant company purchase the entire stock of Ulfberth, or did the blacksmith or the heir of his trademark personally move to Finland? In either case, the mutual traveling of cultural and mythological material could have been sped up. While the Fundinn Noregr saga declares the forebear of the dynasties of Norway, Orkney, Normandy, and England as being the ancient giant Fornjotr from Finland, the Franks did even better. Their royalty was legitimized by being "sea-born."

The most likely place of origination of Ulberht swords is in the Rhineland region (i.e. in Austrasia, the core region of the Frankish realm, later part of the Franconian stem duchy). A Frankish origin of the original swords has long been assumed because of the form of the personal name Ulfberht; a sword found in Lower Saxony in 2012 used lead in its hilt which has reportedly been analysed as originating in the Taunus region, reinforcing the hypothesis of Frankish manufacture of the Ulfberht swords, but were clearly sought-after, prestigious artefacts in Viking Age Scandinavia. 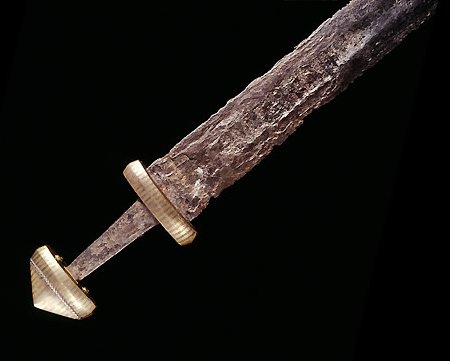 The above strongly suggests that in both cases the royal forefather was precisely the same character, whoever or whatever he was. We Finns should be interested in the fact that the creature was our terrifying war-god, and the name Merovec cannot be without contact with the word 'meri' (sea) which is very ancient, obviously proto-European and indigenous in Finnish languages.

Norwegian-Icelandic sagas: Fornjotr  King of Finland, father of the conqueror of Norway  - "Ancient Giant," forebear of the dynasty

The Merovec legend: A marine monster  -   Royal begetter, forebear of the dynasty

Finland: Ikuturso - War-god, "rose out of the sea when needed"

1] The name of Mérovée can also mean "famous combatant" or "deemed combatant". This would come from the Frankish word Meere "reputation", "message" and vech "battle", "combat"
2] A legend, recounted at a later time - from the Fredegarius Chronicles (III, 9) speaks to an audience of the seventh century & maintains the doubt as to the actual existence of Mérovée: his mother, the wife of King Clodion, already pregnant, was seduced by a "beast of Neptune similar to a Quinotaure" while she was bathing in the ocean. Pregnant a second time, two bloods [i.e lineages] mingled to give birth to a new dynasty whose members were invested with great power and an aura of magic and supernatural, characteristic of the Merovingian. Having said that, the Merovingians kings themselves never challenged the existence of Merovee and glorified in belonging to his lineage.