More on the CROS report ... 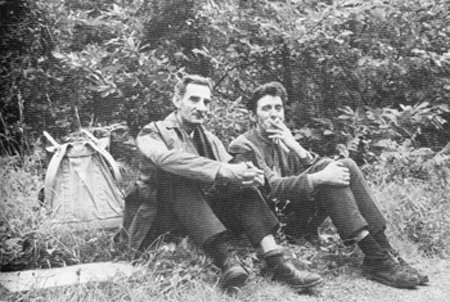 In an excellent article by Mensior on the authorship of the Cros Report, he writes:

"In 1988, Pierre Jarnac published the 'Archives of Rennes -le-Château' in which he discusses Ernest Cros and a burglary at his home in Ginoles. On page 371 of Volume 2, he says: "When he  [Cros] left Ginoles, all his papers were taken to a small cottage ..... they remained there until, around 1960, someone unknown entered the cottage and broke in, and everything was stolen, so that the heirs of Mr Cros could not find any documents assembled by the late Cros." Franck Marie had the same source as Jarnac for this same information - it was Abbe Maurice Mazières. Both Marie and Jarnac had met Mazières; Meziere's [claimed?] that he had inherited from the chief engineer Cros documents and information. Father Mazières informed us in the early sixties through his various correspondence's what had become of some of the papers of Ernest Cros.

The author of the Cros report

Several writers have mentioned in their works about the theft of the Ernest Cros papers - perpetrated at Ginoles in a cottage where they had been stored since his death. Without further indication the theft and its consequences left all concerned thinking that the thief knew what he wanted and perhaps then he [the thief could be the author of the later report. But ultimately, the document circulating in July 1962 at Rennes-le-Chateau is not related to the burglary as this was committed several years later, in 1966 or 1967. In a book by Jean -Luc Chaumeil, published in 2006, Philippe de Chérisey claimed authorship of the "Cros" report. And we must admit that so far, the uncertainty surrounding this document makes such a statement possible:

"That Mr Cros existed is one thing, that the small wad of typed pages was from a typewriter that he would have used himself, is another. As far as I know, as I held these pages in my hands, they could equally be my work, which I could have passed to Mr Noël Corbu in Rennes-le-Château in exactly the same manner that I forwarded Documents I and II to Gérard de Sède.”

Since its circulation in 1962, the " Cros" document has always been anonymous. This was an ideal state that operated twenty years later which allowed Philip Chérisey to claim to be the author of the report. Following study of the Cros document however, this definitively eliminates Cherisey's claim.

First, it should be noted that unlike the apocryphal writings whose authors are Philip Chérisey and/or Pierre Plantard, the Cros Report has never been deposited in the National Library of France, the means which had always been favoured by Plantard & Cherisey to promote their writings. Also, all the apocryphal texts deposited in the mid- sixties into the National Library of France are silent about Ernest Cros. There is an obvious reason for this. For [our] authors and their apocrypha, the reconstruction of the stones in the Cros Report are too restrictive. To overcome this obstacle and to add the items they needed for their scenario, they did not invent a sudden re-discovery of a random paper, as proposed in the "Cros" report but a real statement, and therefore an especially reliable document - they succeeded in temporarily assigning Eugene Stublein as author of a work, according to them, called the 'Engraved Stones of the Languedoc' which showed the Knight stone in a faithful reproduction, and they showed - they say, the second engraved stone covering the tomb of the Marquise de Blanchefort. Their goal was achieved better this way than using the Cros document. This opens a providential breach that our forgers noted previously and has conditioned their implementation of their scenario. It is clear that Saunière carefully erased inscriptions on the slab. There is thus no longer opposition in practice to confirm the 'authenticity' of additional entries! For those Reddis Regis Cellis Arcis, PS, and the Prae -Cum noted on the 'real' Cros Report the forgers added the sentence Et In Arcadia Ego and the drawing of an octopus, additions which are of course non-existent in the report. Nothing contradicts these new revelations, except the book in question - by Eugene Stublein. This book has never been found and therefore probably never written! With the lack of conclusive evidence, it obviously remains very difficult to assign a priori the preparation of this document to any particular person". [Mensior, P Who wrote the Cros Report, translation, latest issue of the magazine Rhedesium].

With the above taken into account it was with great interest that i saw on Paul Smith's web pages "a crude drawing of the two stones as described by Noël Corbu on the 1962 Frances-Inter radio programme. They were bearing the alleged handwriting of Philippe de Chèrisey - they appeared on the internet in 2007 from the private archives of publisher Philippe Marlin". [Philippe Marlin has given me permission to reproduce these pictures below]. Smith continues: "The exact date of the drawing's are unknown but observers think that they appear to predate Gérard de Sède's 1967 book; L'Or de Rennes. The drawing also has the name “Abbé Mazières.” scribbled on it. If this is the work of Philippe de Chèrisey ;it shows that he was aware of the 1962 Frances-Inter radio programme because the letters CELLIS ARCIS are separated by vertical lines (or it proves that he had at least seen the “Ernest Cros Report” where the letters are also separated by vertical lines"). How had Noël Corbu come across the name of Ernest Cros to begin with [he mentioned this report on the radio show]? Smith reckons he must have found it mentioned in a 1959 article about the Knights Templar by Abbé Mazières, who happened to be a friend of Ernest Cros (Le venue et le séjour de Templiers du Roussillon à la fin du XIIIe siècle et au début du XIVe dans la vallée du Bézu (Aude), Mémoires of the Society of Arts and Sciences of Carcassonne, 1957-1959, 4th series, volume III, page 232). Ernest Cros was linked to the region by virtue of spending his holidays in Quillan" As abbé Mazières was the Vicar of Quillan 1940-1954 he knew Cros well.

However - it could also be because the author of the Cros Report in fact was Abbé Mazières. This scenario has been suggested by some French researchers. Because of the research of Philemon [see http://www.rhedesium.com/blog/something-sounds-promising" Here ] there is another option - Corbu might have heard about it from Henri de Montfried and Charroux. There is probably much more to this – Abbé Mazières' position towards Rennes-le-Château is said to mirror that adopted by René Descadeillas – Mazières believed there was “something” to the Bérenger Saunière story as told by Noël Corbu [ he even refers to it here Le venue et le séjour de Templiers du Roussillon à la fin du XIIIe siècle et au début du XIVe dans la vallée du Bézu (Aude), you can read this HERE] and it is evident by reading this article about the Knights Templar, that Mazieres thought the 'mystery at Rennes-le-Chateau encompassed a much bigger 'picture' in this little area of the Aude. In his presentation of the stories and legends of the area that Mazieres gave [originally] as a lecture to the Society of Arts & Sciences of Carcassonne the first person Mazières thanked in his list of acknowledgments was Ernest Cros – his name was on top of Mazières' acknowledgment list.

But if Abbé Mazières wrote the Cros Report from the archives of Ernest Cros - why did he not say the notes were from Cros? Would a priest allow this falsification and lie to continue? Its difficult to know as we do not have the original manuscript of the researches of Ernest Cros. Perhaps because the report we have at the moment is a copy or a re-typing of some notes by Cros, one can clearly see it has been re-written by someone later than Cros - so if this person was adapting information from these notes they saw it as their own. And why did Abbé Mazières not make reference to the drawing in the SESA article - which carried a drawing of the vertical slab tombstone of Marie de Negri from 1905?

It has been suggested also that the Coumesourde “stone” was a forgery perpetrated by Abbé Mazières – however, this suggestion does not furnish us with a motive as to why Abbé Mazières would have wanted to forge the “stone” in the first place. One can see from the pictures below - if they are by Cherisey - that he was most definitely aware of the Cros Report - even down to the detail of the Hill of 532! One can also 'see through' the papers, and it is not too difficult to make out the slab of the Lady of Blanchefort reconstructed in diagrammatic form on the next page! Was Cherisey 'designing' both slabs of Marie de Negri's tombstones, perhaps before he decided to add the 'et in arcadia' wording as well as other later details? Below are the alleged drawings of Cherisey - with some of them reversed so as to better see what is on the opposite side!

As an interesting aside this work of Cherisey reminds me very much of the Sauniere Parchments. For them to work as a geographical map, as we have seen elsewhere discussed on this site,  one has to be able to 'see through' the document - as Plantard said - in superimposition - it is interesting to see the documents below are also a kind of translucent paper where one can see through to the other side! 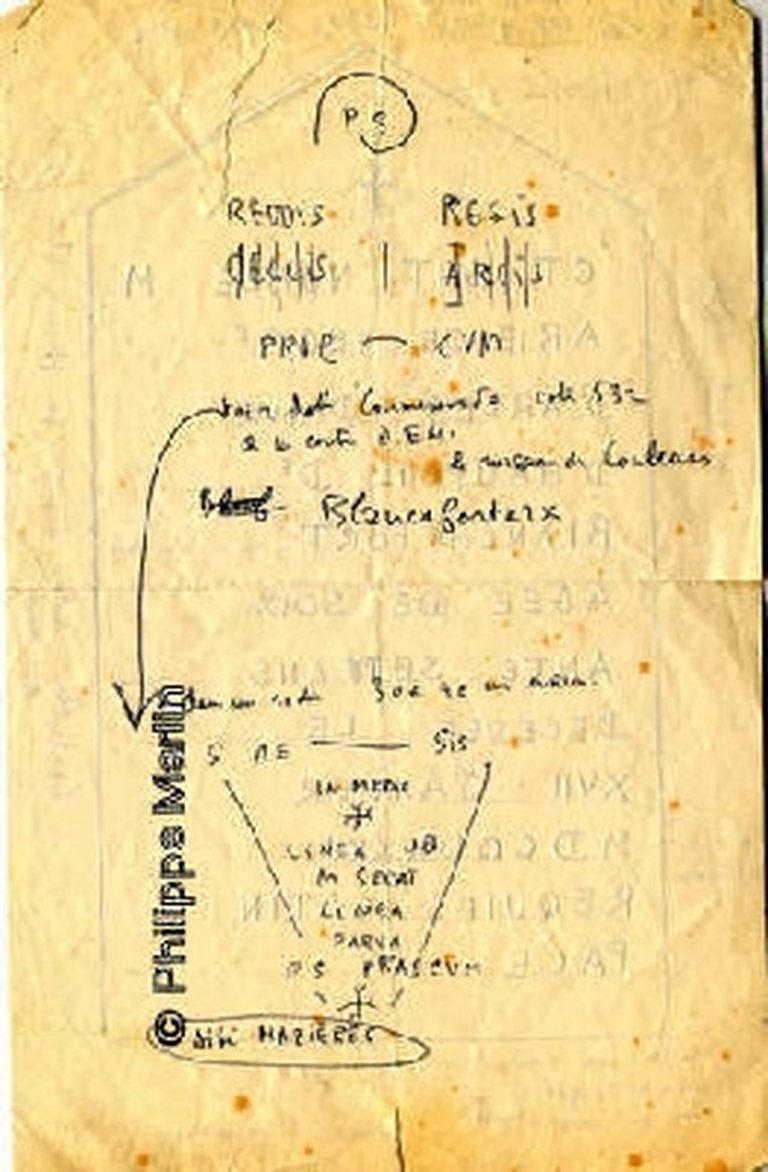 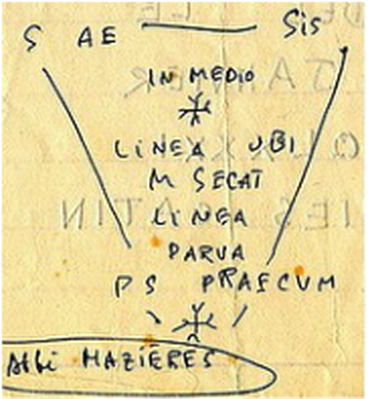 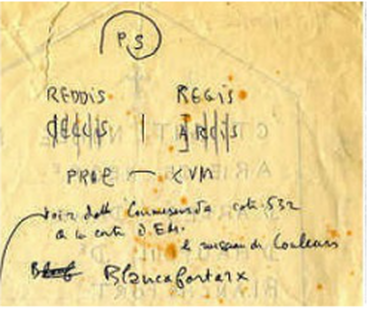 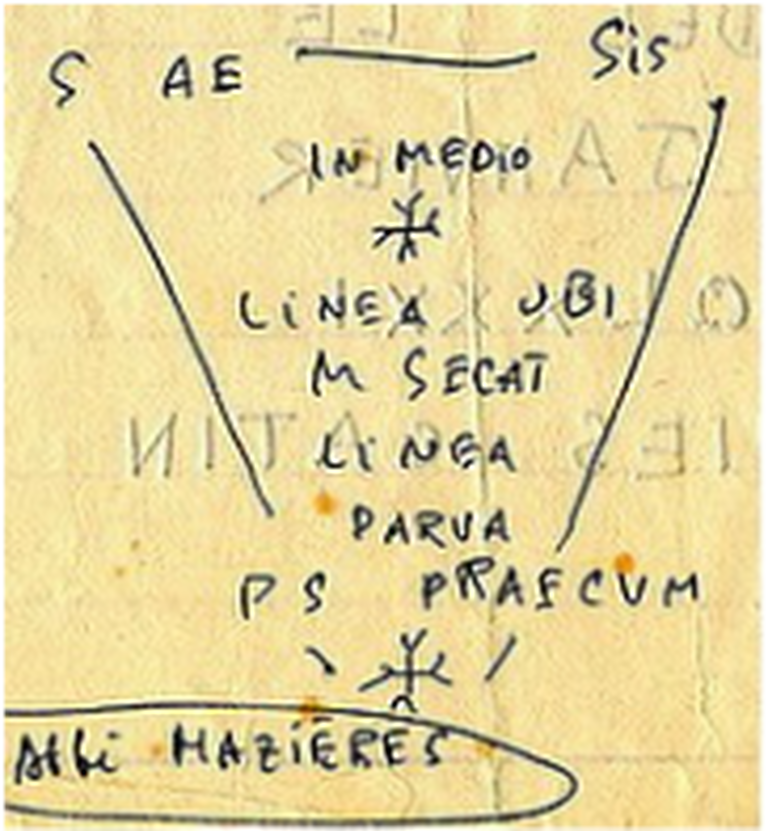 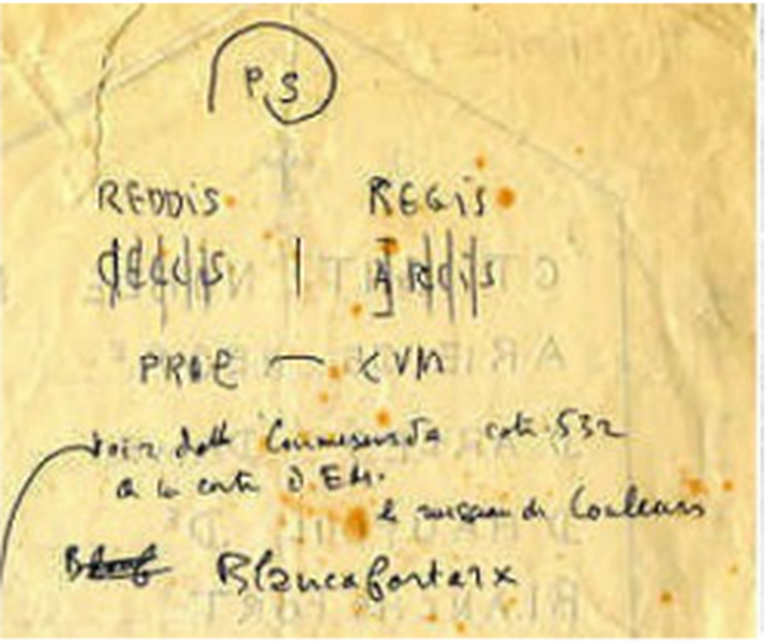 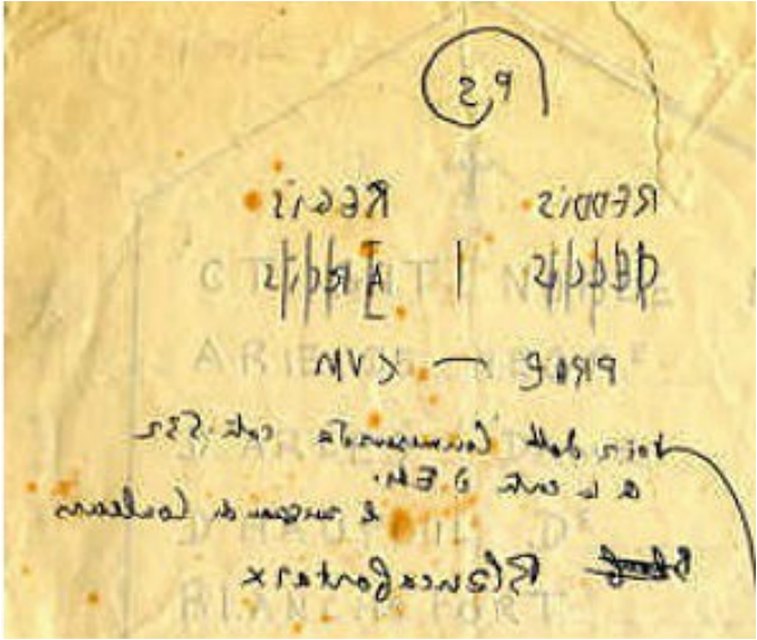 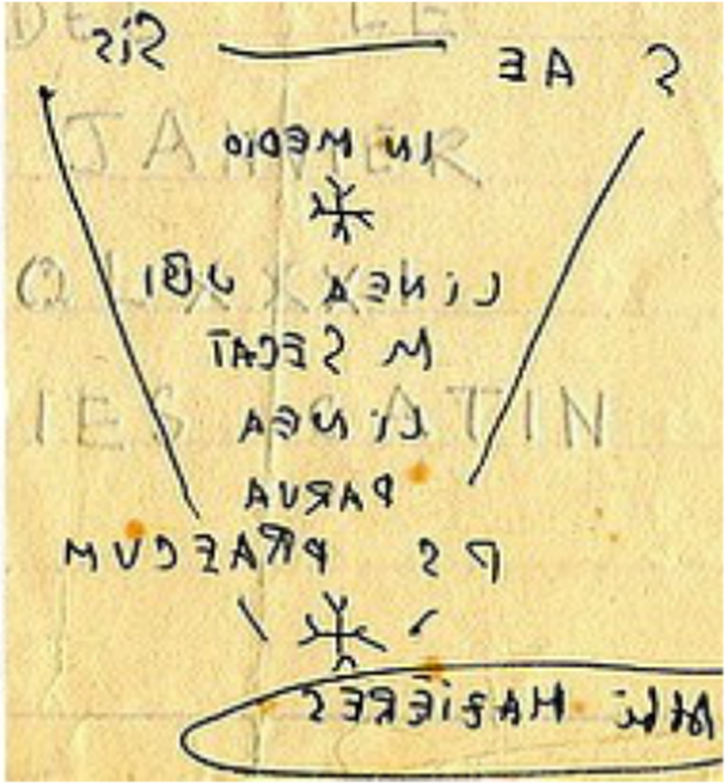