A New Way of Interpreting elements of the cover page of Le Serpent Rouge... 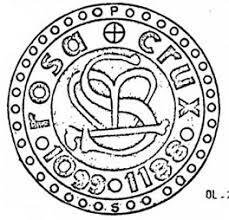 A rather reticent researcher, one who perhaps likes to be and to stay, in the background, has come up with an ingenious way of interpreting some elements of the Priory of Sion paraphernalia. Let me be clear, this researcher does not put any store in the Sion 'mythology' - but she does take Cherisey at his playful and clever word. In her own words she feels his approach is 'extremely clever and rather simple'.  First discussed on the open and public Arcadia forum, which is now defunct, i post here the elements of the main discussion!

Cherisey uses an approach that, to my mind, mimics Boudet. That is, he uses language and phonetics to convey a message 'for those that have ears to hear' [see my section on the Language of the Birds HERE]. The trick is to find out if Cherisey was serious in his work, that is, does his wordplay and games lead anywhere or was he just the prankster in the whole affair as he also claimed to be?

For now though let us look at one of the interpretations of Sheila Hendry.
In the above diagram from the cover of the poem Le Serpent Rouge [whole cover shown below] we see many elements of interest. Not one person to my knowledge has come up with a viable interpretation of the logo LENE BUXEUM - EOUS SCAPHÆ and also the diagrammatic glyph of what looks like a horse and water spilling from an urn . I have had a go, see HERE and some French researchers have proffered a solution, see HERE. It would seem correct perhaps on a superficial level, but the work of  Hendry is more akin to the way Cherisey's mind worked in CIRCUIT. Once you see that pattern it is quite easy to follow it ... but to grasp the full meaning of it not only does one need to look at the language used and interpret that language one also has to hear the phonetics of that language.

"LENE is Latin from lēnis. It means soft, gentle, light, smooth. In French it is doux, douce, calme. In Occitan "lene" = doux (soft and gentle. This word DOUX is pronounced DOO.

Therefore we arrive at:

Say it out loud and you have Dubosc

EOUS. Eous is the Morning Star in the east, Lucifer the light bringer. This is the planet Venus. Say it out loud in French & we have Venu the past participle of venir In Latin = ablative singular of vēnus Venir = to come Venus or Venu = came.

SCAPHÆ This is Latin..... and in fact the plural of SCAPHA From Ancient Greek σκάφη ‎( skaphē, a light boat, barque, skiff ) same as in French it means Bateau, barque, esquif, chaloupe. Even more interesting it means a basin, a bowl, a bath (Bassin, bol, baignoire.) But leave the Latin & go back to the ancient Greek σκάφη σκάφη From σκάπτω ‎(skáptō, “to dig” or "to dig up"). In French σκάπτω, skaptō (« creuser »). skapheíon = digging tool!

Cheval. From the latin caballus. The slang word is canasson \ka.na.sɔ̃\ Cheval. From whence the English word Cob ....l’anglais cob (« canasson ») and the German Gaul ..... l’allemand Gaul.
GAUL
Gaul m ‎(genitive Gauls or Gaules, plural Gäule) (regional) horse (more widespread) hack, nag (bad, old or incapable horse)
https://en.wiktionary.org/wiki/Gaul
https://fr.wiktionary.org/wiki/Gaul
nag = GAUL
Finally Sheila wrote "Dubosc is the chap that opened up and sunk a new shaft that tapped into the "Celtic Underground". I'm not really bothered about what he was looking for... I just wanted to solve the 4 word riddle, it has been bugging me for years".

I, myself, who tries to appreciate the Modus operandi of Cherisey responded to the thoughts of Sheila with the following in relation to the Ancient Greek word σκάφη ‎(skaphē, a light boat, barque, skiff);

One of course has to pick the meaning that best fits - you can see the word also means a 'grave' in some contests.

Our version of grave is the one that uses this etymology i.e An excavation in the earth as a place of burial; also, any place of interment; a tomb; a sepulcher.

This term also has associations with entombing and burying.

Therefore the phrase and diagram in its entirety may mean Dubosc came to dig up a tomb/or sepulchre/or place of burial and the total meaning remains in the term LENE BUXEUM - EOUS SCAPHÆ and the diagram reinforces the LENE BUXEUM - EOUS SCAPHÆ term - if Sheila's reasoning is right!
Presumably this equates with Boudet's mysterious tomb referred to in LVLC somewhere in the Rennes-les-Bains? Which perhaps akin to the fabled underground temple - the Celtic Underground Temple etc ... or a burial associated with Marie de Negre's family?
What i cant understand is how the French have never thought of this? And it will be interesting to see what they make of this new interpretation!